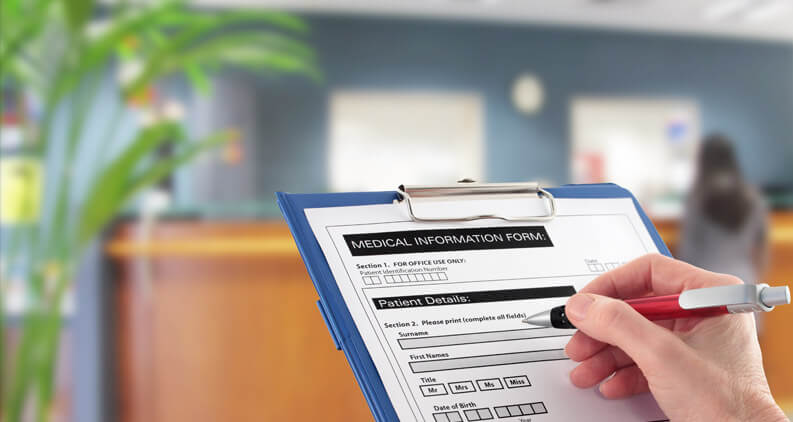 As the deadline for the ICD-10-CM and –PCS approaches on October 1, 2015, home health agencies (HHAs) covered by HIPAA must be up to speed. Enlisting professional coders or at least well-trained billing personnel is paramount so as not lose out on billing revenue that rightfully belongs to your HHA.

In this blog, we’ll explore major changes between ICD-9 and ICD-10 coding practices for which you and your billing or coding staff should be in the know. We’ll also take a look at top coding errors based on outcomes from a study where coders made errors two-thirds of the time when enlisting ICD-10 coding.

In order to earn your full profit of changing to a new code currency, home health agencies must invest in the cost and time necessary to move to systems and software that utilize the new ICD-10 coding. HHAs must also educate their staff to successfully translate the meaning between the old ICD-9 codes and the new ones.

Rest assured, however, ICD-10-CM has the same categorical structure as ICD-9-CM. Some of the new features of ICD-10-CM include the following:

Combination codes for particular conditions and typical associated symptoms and disease manifestations, such as:

Some clinical concepts are non-existent in ICD-9-CM. These include:

Some codes have broadened significantly. Here are two examples:

Additional changes include a new discrepancy for coding between intra-operative complications and post-procedural disorders. Still more changes between ICD-9-CM and ICD-10-CM include:

Changes to the Number of Numeric and Alpha Digits

There are specific changes to the new ICD-10-CM number of code digits. For ICD-9-CM, codes are three to five digits. The first digit is either numeric or alpha (the letters E or V only). All remaining digits are numeric. Here is the old way of coding (ICD-9): 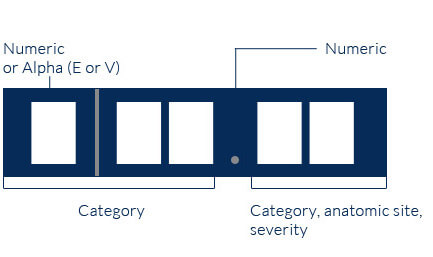 In ICD-10-CM, however, codes can be up to seven digits. The first digit is always alpha (any letter but U), and the second digit is always numeric, with the last five digits of any combination. So by contrast to the above image, here’s how the ICD-10-CM coding will look:

The next image demonstrates an ICD-10-CM code for chronic gout due to renal impairment, left shoulder, without tophus: 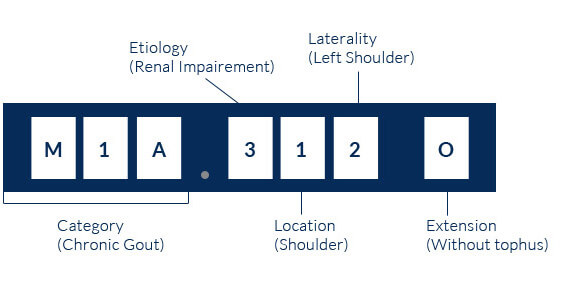 For the ICD-9-CM code 599.7, Hematuria, the old system uses one code for all cases of hematuria which are documented in the patient’s medical record. Thus, it is connected to all ICD-10-CM hematuria codes. There are four of these codes in ICD-10, three of which are more specific than they were in the ICD-9-CM coding practices. Here’s an example of what I’m getting at here:

Finally, for fractures, ICD-10-CM coding captures left versus right side of body, initial versus subsequent encounter, routine versus delayed healing, and nonunion versus malunion.

These are just some of the more obvious coding changes between ICD-10 CM and ICD-9-CM. Now let’s take a look at some of the errors that your coding or billing staff are anticipated to make.

A typical coding practice is to use the same code for two different diagnoses. Although this is considered acceptable from the billing perspective, it could leave a fair amount of reimbursement dollars by the wayside. An example would be if your coder used the same one or two diagnoses and severity codes for an orthopedic post-op rehab visit. This would result in no depiction of the co-morbid impact, leaving you with a flat value.

Another error your coding staff could make would be to use outdated codes. A recent code revision is that of the Hospice Debility NOS. Similar therapy code issues will create denials and costly consequences to your HHA.

Coders should not overlook OASIS and referral information to address possible inconsistencies. Reduced reimbursement and/or blatant payment rejection can occur due to disregarding any inconsistencies between the physician and hospital diagnosis. You should also make certain your HHA staff doesn’t just enter the most frequently used codes since not only will this not capture the most accurate codes, miscoding can result in more lost revenue.

Another mistake is if a billing staff person, for example, uses a reference manual to select the correct codes. Adequate training is imperative for your coders or billing staff to utilize the new ICD-10-CM codes and to be able to conduct a proper Oasis Review.

Pressure Not Just on Coders

The pressure isn’t just on coders. Precise medical documentation is also necessary for your agency to receive full compensation for its services. Caregivers must be educated as to the proper diagnoses for ICD-10-CM coding.

But the devil’s in the details, and oh, those poor coders.

Researchers found the following items as the coders’ most common errors:

Remember that there won’t be a grace period when this new coding system goes into effect, so you must get your home health agency prepared for using ICD-10 coding by the October 1st deadline. Just know that KanTime is here for you if you need any coding help.